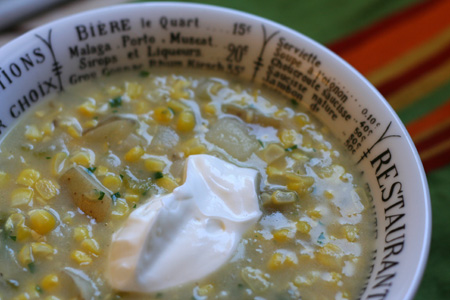 Many years ago when I was going to fashion design school in San Francisco, a friend took  me to a cafe near Union Square on a blustery cold day.  I ordered their corn chowder.  It was better than any corn chowder I’d ever had and I have wished many times over the years that I had been paying attention to my food then the way I do now and taken notes.  It was thick, not runny; it was creamy but not too milky; it was spicy without being heavy with heat.  It had cilantro in it.

That cafe has been closed down for at least 15 years.

For some reason I’ve been remembering that bowl of chowder I ate 20 years ago a lot this summer, so I decided it was time to recreate it from distant memory.  After several batches I present to you one of the best things you can make with summer corn.  Chowder sounds like it’s meant to only be eaten in the cold weather but corn is at its best in the summer so if you can still get some at your farmer’s market, give this a try right away, even if it’s still hot where you live.

My friend Chelsea (a major inspiration for starting Stitch and Boots) suggested I make a stock out of the corn cobs and it was brilliant because the soup had a lot more flavor than when I’ve made it in the past.  It really isn’t too much trouble.  Cook the cobs down while you prep the rest of your ingredients and do some other kitchen chores.  It’s well worth the effort make the stock out of the cobs. 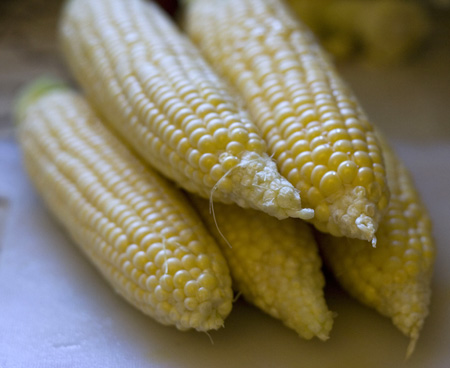 Bring two quarts of water to a boil in a stock pot.  Cut the kernels off the corn and set the kernels aside in a bowl for later.  Break the corn cobs in half and put them in the pot.  Boil the cobs until the stock is reduced to 1 quart (this takes about 40 minutes for me but times may very).

Remove the cobs and set the stock aside.

In a soup pot prepare a roux using the flour, butter, salt, and pepper.  Pour the corn cob stock slowly into the roux whisking briskly to remove any lumps and once all the stock is poured, let the veloute* thicken. 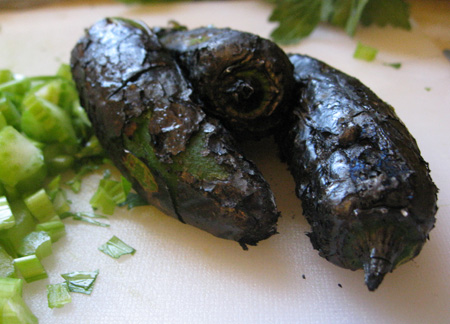 Heat up the olive oil in a medium saute pan and saute the onion and celery until the onion is beginning to brown slightly (this adds more flavor to the chowder).  Remove from the heat and add to the thickened veloute.

Add the potatoes, corn, and jalapenos to the chowder.  Stir frequently to prevent the bottom from burning.  Let the chowder cook until the potatoes are completely done, around 30 minutes.  Turn the heat off and add the milk and the cilantro, stirring them in well.  Let it cool a little before serving.

Top with a couple of tbsp of sour cream and serve! 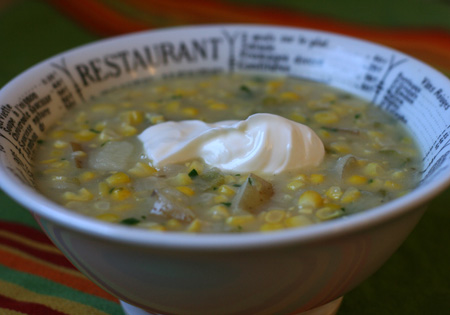 Recipe Notes: You can use a lot more cilantro and the soup will still be great.  I made one batch with a whole bunch of cilantro and though it was good, I wanted the emphasis to be on the corn so the next batch I used just 2 tbsp and thought the balance was much nicer.  You can also garnish with some additional cilantro if you like.

The chowder is just as good without the evaporated milk (I made it both ways) but a true chowder has milk and I like the flavor it adds so I prefer the version with milk.  A word about the jalapenos- mine were very hot and 3 of them was almost too much but I later bought peppers from a different vendor at the market and they barely had any heat.  So my suggestion is to only use two if your pepper are especially hot this year and you don’t want the soup to be super spicy.

One more thing- if you don’t have fresh corn on hand and want to use canned or frozen, 5 cups might be an awkward amount (it’s the amount I got off of 8 ears of corn).  Don’t worry about it.  Use whatever quantity comes closest in canned or frozen without wasting any.  A little difference in quantity of corn one way or the other won’t ruin this chowder.

*Technically a veloute is made with beef or chicken stock but when making a vegetarian dish you always substitute meat stocks with vegetable stock so while it isn’t a true veloute, this is a vegetarian version of one.

This recipe is vegan if you make the roux with olive oil instead of butter and omit adding the evaporated milk.

Related article:
How to Make a Roux

One thought on “Spicy Corn Chowder”